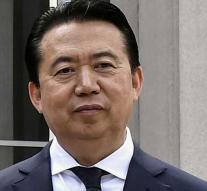 beijing - Interpol director Meng Hongwei was arrested after arrival in China and taken for interrogation. The Chinese watchdog against corruption said on Sunday evening that the authorities have initiated a judicial investigation of him because they suspect him of a violation of law.

Meng, who was vice-minister of Public Security in China, was reported missing because he had flown to his homeland from France, where the international police organization had its headquarters. The French police are also involved in the 'worrying disappearance' of Meng. His wife gets police protection in Lyon after being threatened.