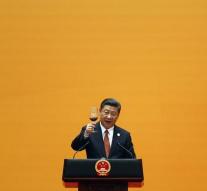 peking - Chinese President Xi Jinping has promised more than 110 billion euros on Sunday for projects to unlock new trade routes between Asia, Europe and Africa. He did this Sunday in Beijing at the start of a two-day summit, which is a sign of his initiative 'Belt and Road', which is also called the 'New Side Route'.

Beijing has been evenly purged and everything has been polished for the summit that has brought nearly thirty presidents and government leaders and dozens of other envoys to China. Xi launched his plans for massive infrastructure projects in 2013 in Kazakhstan. The president of that country along the side roads, Noersoeltan Nazarbayev, took place next to Xi during a festive banquet on Sunday.

The 'silk route' refers to the trade routes between Europe, the Middle East and China, which were used from the classical to the Middle Ages.