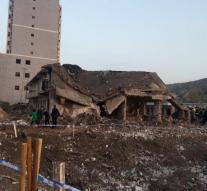 - The large explosion in the Chinese city of Xinmin that killed Monday at fourteen people died was caused by the illegal production and storage of explosives.

This has confirmed the state news agency Xinhua Wednesday. The explosion also got 147 people were injured and dozens of homes and a hospital badly damaged.

' Three suspects were arrested Tuesday. All have pleaded guilty, '' informs Xinhua. The owner of the five houses where the explosion took place, was arrested by the police. It is unclear what the cause of the explosion explosives. In the region around Xinmin find many mining site, with many using explosives.