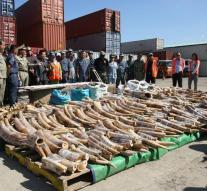 beijing - To the delight of the World Wildlife Fund (WWF) China bans from next year ivory trade. processing and trade be restricted from late March. As of December 31, 2017 subject to a total ban, the WWF learned Friday from Beijing. The nature organization speaks of a 'historic decision' that 'will give tremendous boost to the fight against the poaching of elephants.' A

China is currently the largest market in the world for ivory, which comes from the tusks of elephants. 'Closing the largest legal ivory market to people in China and overseas deter buy ivory and make it harder for ivory smugglers to sell their illegal stocks,' said the WWF.

The Chinese government had previously informed that the legal domestic trade in ivory would come to an end once. But it happens so fast though, the WWF has pleasantly surprised.

The United States, another major market, decided earlier this year largely to ban the ivory trade. There are some exceptions, for example for older instruments where ivory is processed. In Europe, trade in ivory for years restricted, but there are exceptions to the rule. So can objects of ivory manufactured or marketed before 1990.

According to the WWF and Traffic Organization, which keeps the trade in eye peaked poaching of African elephants in 2011. But still according to the organization each year about 20 000 elephants slain by poachers. This is done mainly for their ivory, which is still in demand in China and other Asian countries. Are made jewelry and ornaments and it is used in ground form in some traditional medicines.