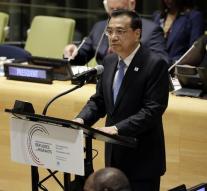 "Premier Li Keqiang vowed Monday during a meeting of the United Nations about 100 million dollars (almost 90 million euros) extra to be made available for humanitarian aid to the displaced people worldwide."