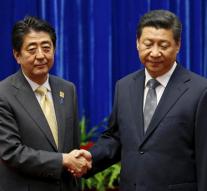 - For the third time this year, China has arrested a Japanese resident in China. This said a government spokesman in Japan Friday.

The spokesman said that the woman in June was already detained in Shanghai, but only last month has been arrested formally. He gave no further details, even if they are suspected of espionage.

In September, China announced it had two Japanese citizens arrested for espionage. The Chinese Embassy in Tokyo later confirmed that another person was arrested. The fourth person was a man who, according to Japanese media had helped people to flee from North Korea. That person would be stuck since June.

The government spokesman reiterated that Japan engages in any country with espionage, but declined to comment further on the specific cases.

China's ties with Japan were long under pressure by a territorial dispute and what Beijing sees as Tokyo's failure atone for wartime atrocities. But relations have improved since Japanese Prime Minister Abe and President Xi met in November 2014.