Home / World / China and Philippines fall into each other's arms 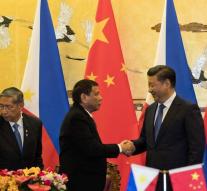 - The United States has completely dismissed Duterte for President of the Philippines as a best friend. The new comrade called China. During a visit has both Duterte expressed his Chinese counterpart Xi Jinping to China that even can not disturb the good intentions disagreement over the South China Sea.

Rodrigo Duterte arrived in Beijing with about two hundred Filipino businessmen in tow. New contracts in China make it easier to tear the old with American companies. President Xi showed enormous satisfaction. The Philippines and China are brothers, he exclaimed. The roots of the two nations are interconnected, Duterte said.

Challenging the domination of the South China Sea countries now consider the formal and no more than a part of the shared interests. The Permanent Court of Arbitration stated nota bene recently the Philippines in favor in a dispute over the application of Chinese fishing vessels by the Navy in its part of the sea. That seems suddenly forgotten.

The two Asian countries make plans for the resumption of exports from the Philippines of agricultural products to China. In turn, Beijing is financing large infrastructure projects in the impoverished Philippines. Bilateral cooperation will be stepped up quickly. The old US ally Duterte said: 'I do not go to America, because we only get offended. '