Home / World / China and North Korea in talks after sanctions 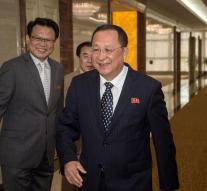 manila - The Chinese Foreign Minister and his North Korean ambassador held bilateral talks on Sunday in the run-up to a regional security meeting in the Philippines. The meeting between Chinese Wang Yi and Ri Yong-ho took place after the United Nations Security Council a day earlier agreed to heavier sanctions against North Korea.

China also agreed with the resolution aimed, inter alia, on exports from North Korea. Despite the punishment, the atmosphere was pleasant when both ministers shook hands. Before she disappeared in a room, Ri remained cheerful and Wang put his hand on Ri's shoulder. What the two have discussed is not disclosed.

According to Wang, the imposed penalties are an appropriate response to North Korea missiles, but it is also important to stay in touch with North Korea.