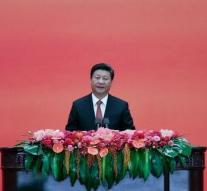 - China also condemned the attacks in Paris. President Xi Jinping did that during a telephone conversation with French President Francois Hollande. In addition, he said, according to the Chinese Foreign Ministry that China is willing to France and to help the international community in the fight against terrorism.

Hollande also called on US President Barack Obama. Which according to the White House reiterated what he said on Friday during a television speech : the United States wants France to help in the investigation of the attacks. Also condolences Obama Hollande.