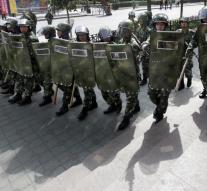 - Chinese security forces have 28 violent protesters slain in the western province of Xinjiang. That made the regional government said Friday. The activists are part of the militant group that in September this year in Xinjiang 16 people stabbed at a coal mine.