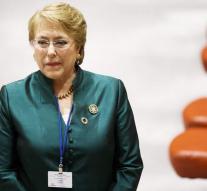 - The Chilean government comes up with a bill in the first half of 2017 to legalize gay marriage. That promised the Chilean President Michelle Bachelet during a panel discussion at the United Nations.

' My government is determined to impose a law on marriage equality in the first half of next year to Congress, '' said Bachelet. Gay Couples currently can already enter into a registered partnership in the country.

If the law is passed, Chile joins a growing group of South American countries where loved ones with the same orientation to get married. Gay marriage is already recognized in Argentina, Brazil, Uruguay and parts of Mexico.

Bachelet also had good news for other minorities. She plans to take additional steps to strengthen the legal status of the LGBT community.