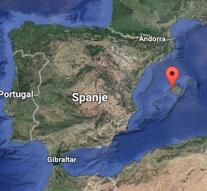 palma - Three children on the Spanish island of Mallorca for days with their dead mother lived in the house. The deceased woman's body was Tuesday at her home in Palma found after the youngest of three children of eleven, ten and five years the road was gone and a passerby had asked for help.

The boy said he had not eaten for days because his mother was in bed and never woke up. The alerted police went inside the house and found the woman, an African forty years. She died four days earlier, according to an initial investigation by natural causes. The children were taken to a hospital for examination, local media reported.