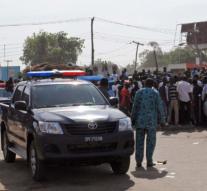 maiduguri - Two young girls have blown himself up in a crowded market in northeastern Nigeria. Thereby came according to the BBC certainly one person killed and eighteen people were injured. The children would have been about seven or eight years old.

The girls let go off their explosives in quick succession in the city of Maiduguri, witnesses say. A member of the local militia told journalists that he had seen getting the girls out of a rickshaw. The man initially thought that the children were looking for their mother. ' They walked right past me without showing any emotion, '' he said.

It is the second time in a short time that girls are used to carry out a suicide attack in Nigeria. Friday two schoolgirls blew himself up in the city Madagali. They dragged dozens of people with death.

The area has for years plagued by violence from the extremist Islamist group Boko Haram. Responsibility for the attack in Maiduguri has not yet been claimed.