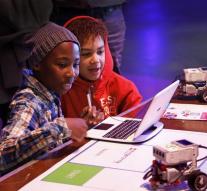 amsterdam - More than 10,000 Dutch schoolchildren do Friday program a shot at the world record. They follow all together at the same time throughout the country lessons in computer programming. About six hundred guest teachers have volunteered to teach the children from group 7 and 8 new 'digital literacy'.

Constantine also participates prince. He joins in the public library of Amsterdam to a programmeerles. Both the record as the so-called European Code Week where they kick off forms, comes from the pen of former European Commissioner Neelie Kroes. She performed from 2010 to 2014, the scepter of the EU's digital agenda.

'Jobs now exist in the future no more, there is an increasing need for technical expertise,' the foundation CodeUur states hosting the record. 'Children are there still are not adequately trained for. They therefore often lack the technical skills they need for the jobs of the future, or for jobs that include a software component. '