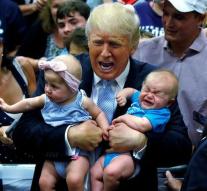 - In the run up to the US elections, students in the US have traditionally voted again. Although the real results will not be known for three weeks, American schoolchildren are already out: Hillary Clinton, the new president of the United States should be.

Clinton scored a big victory under the voting students: no less than 52 percent of the 153 000 children who cast their vote, chose Democrat. Trump had to make do with only 35 percent, reports USA Today.

Remarkably consistent outcome of the school election, which has been organized since 1940, almost always with those of the real showdown. Pupils were equal as the last thirteen elections again.

During this election campaign proved otherwise more often children and Trump are not the most ideal combination: the presidential candidate was snapped last week when he held two babies who were not charmed both there and set up a roar.

Nevertheless, The Donald remains invariably do best: to polish his image, he plucks regular ones in the audience during his speeches.