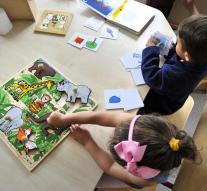 darmstadt - One child took a bomb from World War II to a daycare center in Darmstadt (Hessen) in Germany on Wednesday. Staff noted the suspicious object and hit alarm, said a police spokesman. Then they evacuated the premises carefully.

The explosive cleanup service broke out to discharge the explosive. Later there was another search in a forest where the child would have found the fire bomb. According to the police, no other explosives were found.