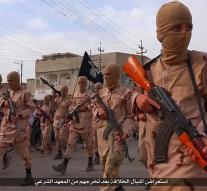 erbil - Not only terrorist organization Islamic State puts children to fight, would also recruit child soldiers its opponents in Iraq.

Human Rights Watch get Iraqi militias, which are paid by the Iraqi government, children away from refugee camps to prepare them for a major assault on Mosul, which is in the hands of the terrorists.

The human rights organization says at least seven children recruited in the refugee camp Debaga, forty kilometers from Erbil. There are 35 000 displaced people were housed. Also, hundreds of adult men have applied themselves for battle.


Human Rights Watch calls on all warring parties to soldiers not to fight under 18.

Islamic State is already known that the children's commitment to the fight. In horrible propaganda films for example to see how children executed prisoners. recently was a boy of 12 with a bomb belt arrested.