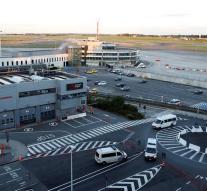 brussels - Around Zaventem airport will soon enter a camera shield that monitors all access roads. That can recognize license plates and store alarm when approaching suspicious vehicles.,, Only at times targeted troops will still carry out additional checks, '' the Belgian government announced in Dutch newspaper De Morgen.

Since the attacks of 22 March subject to a stricter monitoring at Zaventem airport. Heavily armed officers check every car. However, it is no secret that the summit of Brussels Airport in favor of 'discreet' security.