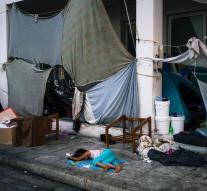 - Young children are sexually abused in official European refugee camps. Reported that the British Sunday newspaper The Observer on the authority of goededoelen- and human rights organizations. Some camps were so unsafe that young people evenings are terrified to leave their tents.

It mainly concerns the camps that are decorated in Greece and run by the Greek government. There is a camp in a former toilet paper in Thessaloniki, where women's night not dare to go to the shared toilets. In camp with 1400 mainly Syrian refugees would be a seven year old girl abused among others.

The UN refugee agency UNHCR says she has expressed her concerns to the Greek authorities.