Home / World / Child (12) wants to save mother and drowns 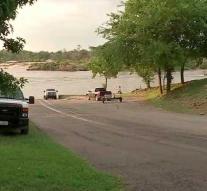 houston - A twelve-year-old girl drowned when she tried to save her mother from the American San Jacinto River in Texas. The child's body was salvaged on Sunday after an hour-long search, local media reports Monday.

The mother was in trouble, according to a relative, during swimming. Two teenagers came to the aid, but went under-the-head. One of them could be saved. The other child did not come up anymore. A man who dived after her discovered, according to the police, that the girl had disappeared into a deep hole. This happened at a place where the water seemed fairly shallow.

The mother could eventually be taken out of the water. The Harris County police advises swimmers to wear a life jacket when they go swimming in the river.