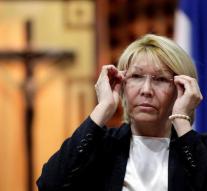 bogotá - The former Attorney General of Venezuela Luisa Ortega has traveled to Brazil. That has been announced by the Colombian immigration service on Tuesday. Ortega, a declared opponent of Venezuelan President Nicolás Maduro, fled in friday from her husband via Aruba to Colombia. The prosecutor stated that her life was no longer safe in Venezuela.

Colombian President Juan Manuel Santos announced Monday that he was willing to give Ortega political asylum if she would ask for it and promised her protection. Maduro said during a speech that Venezuela would issue an international investigation order for Ortega. He accused her of cooperating with the US for a long time.

According to the Venezuelan news site La Patilla, Ortega was flown to Brazil to attend a meeting of prosecutors and lawyers, held under the auspices of the Mercosur Free Trade Organization. She wants her South American colleagues to prove that Maduro and his entourage have been guilty of bribery and corruption.