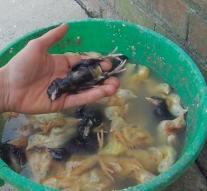 tell - Again, there has been a fuss about gross abuses at a Belgian livestock company. According to the Animal Rights Organization Animal Rights, in a poultry company in Tielt 'unsuitable' chicks the nerve is turned or drowned.

Earlier this year a slaughterhouse for pigs came from the same place in the news by a shocking video showing that the animals were heavily abused. That led internationally to disgust and bewilderment.

The cattle breeding company was also filmed with a hidden camera. According to the activists, the images (beware of shocking) show that chicks that are too small or show abnormalities are immediately terminated by turning the neck. Also, the animals would be drowned or they ended up living in a trash can.

Animal Rights has launched a petition to ask the Flemish government to stop promoting meat and dairy products.

For the moment, the poultry company does not want to react because they have not been able to view the images yet, according to Flemish media.