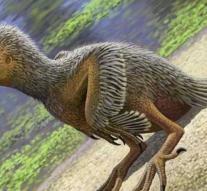 manchester - In Spain, a fossil of a chicken from 127 million years ago was found. The bird was only five inches tall and must have weighed about ten grams when it was alive. The chick was very young and just out of the egg when it died; his bones were still weak and it could not fly yet.

The discovery can teach scientists something about the evolution of birds. 'It is remarkable to see that many of the bird's features were developed more than 100 million years ago,' said researcher Luis Chiappe of the Museum of Natural History in Los Angeles.

The chick belongs to an extinct group of birds, the enantiornithes. They had claws on their wings and teeth in their beaks, but otherwise they seemed pretty much like birds of today.