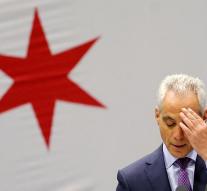 chicago - Chicago goes to court for Donald Trump because Washington wants to punish the city financially for its immigration policy. Mayor Rahm Emanuel of Chicago, a friend of former president Barack Obama, told that Sunday.

A few weeks ago, Justice Minister Jeff Sessions announced that his department would exclude cities from subsidy projects if they refuse to cooperate with the federal immigration service. To combat illegal immigration, Washington wants unlimited access to local prisons.

Emanuel said he would not allow 'the fundamental rights' of Chicago residents to be violated. He believes that the Trump Chicago government and other sanctuary cities can not penalize financial policies for immigration.