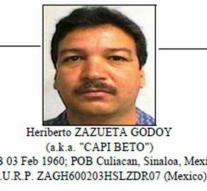 - Mexican police have arrested a leading member of the Sinaloa drug cartel. Heriberto Zazueta, alias 'Beto Capi ', would like main logistics have been responsible for maritime drug trafficking.

Zazueta was arrested in Mexico City, the federal prosecutor said Thursday. There was for him a US extradition request on charges of drug trafficking and money laundering. The US Treasury Department put him in 2014 on a blacklist, with his possessions in the United States were frozen.