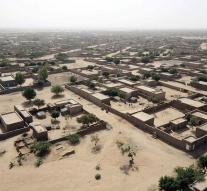 paris - Armed men have kidnapped the leader of a French relief organization in Mali. It involves the Frenchwoman Sophie Pétronin in Goa directs a non-government-related organization that helps children with malnutrition.

According to the Malian army she was taken to northern Mali. The identity and motives of the kidnappers are unclear. The abduction was confirmed by the French Ministry of Foreign Affairs.

Pétronin lived and worked for years in Goa, a city known as a stronghold of Muslim rebels.