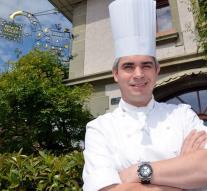 lausanne - Benoit Violier, chief cook of the best restaurant in the world, is deceased. Violier (44) L'Hotel de Ville near the Swiss city of Lausanne ran, has allegedly committed suicide. He was found dead at home, reports the BBC.

The restaurant had three Michelin stars and was voted by the French La Liste in December last year as the best eatery in the world. To the Swiss naturalized Frenchman worked there since 1996 and took over the catering business with his wife in 2012. He was known for his wild dishes. He shot the animals themselves.