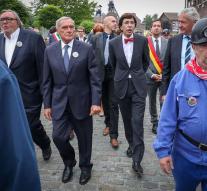 - Strict security measures are in force Monday in commemoration of mine disaster of 1956 in the Walloon Marcinelle. Which is a suburb of Charleroi, where an Algerian Saturday two policewomen stabbed. Soldiers and officers are stationed at the entrance of the former colliery and backpacks visitors are thoroughly checked.

A fire in the mine called Bois du Cazier took exactly sixty years ago, 262 people died, including many Italians. The disaster is known as one of the largest in the European mining history and led to more health and safety regulations in mines.

For the annual commemoration come Monday hundreds of former miners from many countries met in Charleroi. At the ceremony be bells sound and laid flowers to the victims. Sunday was held already a church service.