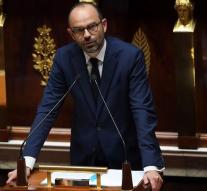 paris - French Prime Minister Edouard Philippe called on parliament in parliament to re-order the state's household book on Tuesday. He said that his country is 'addicted' to government spending, resulting in an unsustainable financial situation.

Philippe compared the French government spending with the German. Berlin, according to the Prime Minister, spends 98 euros of every 100 euros collected from taxes. The French government issues 125 euros for every 117 euros that enter. 'Does anyone really believe that this situation is sustainable?' He wondered aloud.

'The French are beaten by government spending,' said Philippe in the National Assembly, the French Lower House. 'Like all addictions, it does not solve any problems that make it easier. And as with all addictions, willpower and courage are necessary for kicking off. ''

The independent accountant of the French government warned last week that the country will end this year with a budget deficit of 8 billion. This threatens France to again violate the EU 3-percent standard: the rule that a budget deficit may not exceed 3 percent of GDP.

Philippe, who also warned that government debt was too high, stressed Tuesday that he wants to bring the budget deficit below 3 percent this year. The deficit was 3.4 per cent last year. According to the Prime Minister, it is urgent to take measures: 'We dance on a volcano that is becoming increasingly harder. ''