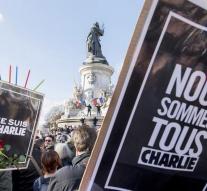 sofia - A 20-year-old man who was suspected of involvement in the attack on the editor of the satirical French magazine Charlie Hebdo, was arrested in Bulgaria. He would like to join (IS) in the Islamic State. According to Minister Rumiana Bach Varova of Interior showed the man behavior 'typical of a foreign fighter. He has to answer Wednesday for the Bulgarian court.

According to French media concerns Mourad Hamyd. He is the brother of Cherif Kouachi, one of the two main suspects of the attack. Hamyd became suspicious and questioned earlier, but released. However, he was put on a list of suspected terrorists. How could he leave the country is unclear.


France wants Hamyd be extradited. Where the man being held is unknown.