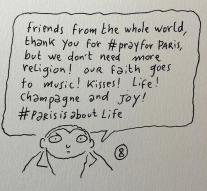 - The satirical French magazine Charlie Hebdo on Saturday with some cynicism responded to the call Pray for Paris (bid for Paris), going around on social media since the attacks on Friday in Paris.

The magazine has a cartoon published with the text : " Friends from around the world. Thank you for #PrayforParis, but we do not need more religion ! Our faith is all about music! Kissing ! Life! Champagne and merriment ! #Parisisabout Life. "

The editors of Charlie Hebdo in Paris was on January 7 of this year's target of an attack by Muslim terrorists. In addition, twelve people were killed, including a number of editors.