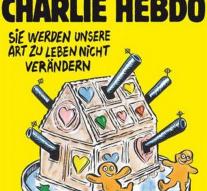 paris - The German edition of the satirical magazine Charlie Hebdo opens the incoming number with the terrorist attack in Berlin. The French publisher revealed Wednesday already the front page. Then there is a house of gingerbread stabbing which gun barrels. 'They will not change our way of life' is the accompanying text cartoonist Foolz.

Charlie Hebdo is since early this month in German in the kiosks. The magazine was almost two years ago itself world by the invasion of two Muslim extremists. Those shots in the newsroom in Paris twelve people dead, including several well-known artists.