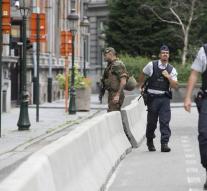 - One of the policewomen who sat in the Belgian town of Charleroi, was attacked by a 33-year-old Algerian with a machete, is Muslim and as the perpetrator of Algerian origin. Islamic State claimed the bombing. If the attacker actually acting on behalf of IS, the terrorists have once again shed the blood of someone for whom they just pretend to come.

The 44-year-old Hakima Saturday was the first victim. The Algerian touched her with his machete in the face. She ran while serious injuries and fell into a coma. The woman underwent a first reconstructive surgery and there will be more operations. Meanwhile, it goes a little better with the officer. 'Hakima is a Rambo. She is strong. She shows now stronger than ever, 'said her brother.

Her colleague Corinne need surgery again. The Belgian King Philip will Tuesday visit the two policewomen. After his visit to the hospital where they are treated, the king went to the police station where the stabbing took place, told the royal palace Monday.