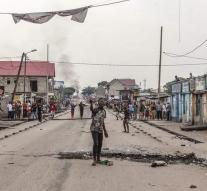 Opposition leader Etienne Tshisekedi called Tuesday on the people of Congo to protest peacefully and to revolt against Kabila.

Officially there is a ban on demonstrations and there are many soldiers on the streets. The authorities have blocked most social media.

Western countries fear that the African country falls back into chaos. Kabila who has been in power since 2001, shows rarely publicly about his stay on. His supporters say that elections have been postponed logistical and financial reasons.