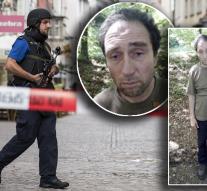 schaffhausen - The Swiss police did not yet know the man with the chainsaw. The 50-year-old perpetrator injured two employees in a hospital fund in the city of Schaffhausen on Monday. One of them suffered severe injuries but is not in danger of life.

The attacker intentionally visited the office, according to the police, but for what reason has not been announced. The man went there after his attack.

The car he used was found later. The police consider the man who has no permanent residence to be dangerous.

Schaffhausen is located in the north of the Rhine, near the border with Germany.