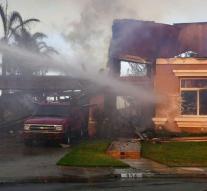 los angeles - Natural fires in northern California have cost at least ten people's lives and certainly 1,500 buildings have gone up in flames. Burning in the area more than fourteen burns and possibly more people were killed.

Many residents have fled for the fires which threaten, inter alia, the well-known wine regions around Napa and Sonoma Valley. The sheriff of Sonoma County reports that seven people died there. In Napa County, two people died and one victim died in Mendocino County, writes the Los Angeles Times.

The governor of the state, Jerry Brown, declared the state of emergency on Monday. Due to the harsh wind in the night from Sunday to Monday, the situation has deteriorated rapidly. Unusually high temperatures and severe drought have increased the risk of fire in many parts of the west of the US in recent months.