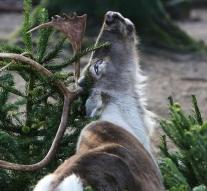 - Authorities in northern Siberia are planning for Christmas certainly finish a quarter of a million reindeer. The governor of the Yamalo-Nenets region, Dmitri Kobilkin, has called quickly to come up with a plan to get rid of the animals.

Live in the area estimated 700 000 reindeer. Every year thousands are slain to keep their numbers under control, but this year the governor wants the big deal. The reason is the fear of anthrax. The disease last summer turned up in the thawed carcass of an animal and is spreading across the region. So far, a twelve year old boy, four dogs and reindeer collapsed in 2350, reported Friday the British newspaper The Guardian.

According to experts cited by the Siberian Times, the risk of the spread of anthrax much greater if the reindeer population is dense. And in some areas there are anyway too many reindeer. On the peninsula Jamal live 300 000 while the area has food for only a third of the animals.