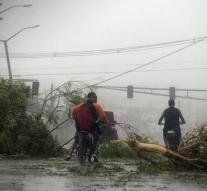 roseau - Prime Minister of Dominica, Roosevelt Skerrit, has announced through a local television station that Hurricane Maria has certainly claimed fifteen human lives on his island. There are also twenty missing people.

Earlier it was assumed seven deaths due to natural violence that also left a trace of destruction. Skerrit said, according to the BBC, that it may be a miracle that hundreds of deaths have not fallen.

READ ALSO: 'Everyone has lost his roof'