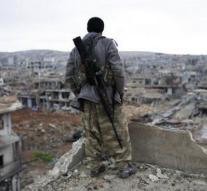 - At Turkish air and artillery bombardments least 35 civilians were killed in northern Syria, said the Syrian Observatory for Human Rights. More than seventy people were injured

Twenty killed and fifty wounded fell in the village of Jub al-Kousa. In an attack on a farm in another village, al-Amarna, came another fifteen people and twenty were injured, according to the Observatory, which relies on reports from activists.

The Turkish Armed Forces to support Syrian rebels fighting in northern Syria against Islamic State, but also against Kurdish militias who are part of the Syrian Democratic Forces (SDF). The conquered militias backed by Turkey in the past week, the border town Jarablus.

Mega Ship of 225 meters must by lock