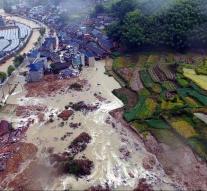 - Rescuers saved 15 people after a landslide Thursday morning in China, but 32 people are still missing. The landslide came after hurricane Megi had done to the eastern province Zheijang, followed by heavy rain.

Especially Sucun village faced the mudslide that also debris, trees and stones with it dragged. Here 26 people were missing. In another landslide six people have been missing in the village of Baofeng.

The rescuers are still searching for survivors.

By Hurricane Megi so far four people have died and 523 injured in Taiwan, Megi after the country had come from the Pacific Ocean.