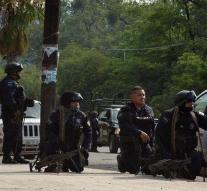 acapulco - In a fight in a prison in Mexican Acapulco, Thursday's local time has fallen 28 deaths. There are also three injured cases.

Acapulco is the largest city of the Mexican state of Guerrero. There is little enforcement and many opium is produced.