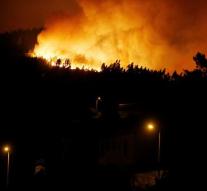 lisbon - With a heavy forest fire in Portugal, 24 people have killed. The situation in Pedrógão Grande, which lies about 200 kilometers northeast of Lisbon, is very worrying in the night of Saturday on Sunday. Premier António Costa was shocked by 'extent of tragedy'.

Some villages are 'fully enclosed' by the flame sea, the mayor of the area, Valdemar Alves, in the newspaper Público. President Marcelo Rebelo de Sousa visited the area and spoke of a situation that has no example.

Of the victims there were sixteen with their cars on their way when they were trapped by the flames. Three others died of smoke poisoning. Certainly two people are still missing. More than twenty injured, including six firefighters, were hospitalized.

The fire broke out on an unknown occasion in the densely populated area on Saturday afternoon. Mayor Alves, however, says he is convinced that it is about firefighting.

The fire rages in four places and is fought by about 750 firemen. They are assisted by two firemen. Strong wind, however, impedes the extinguishing work. The fire has been skipped to three neighboring municipalities.

The forest fires in Pedrógão Grande are the deadliest in Portugal in more than half a century. In 1966, raging fire in the Sintra region came about 25 days in one of seven days.