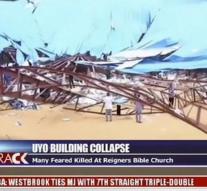 - The death toll from the collapsed church in the Nigerian city of Uyo has risen to 160. Dozens of people are still seriously injured in hospital. The building had gathered a lot of people according to Nigerian media as a spiritual bishop was consecrated.

It is still unclear which construction collapsed suddenly. The Reigners Bible Church would reportedly be redone because of the expected high turnout Saturday.

It is the second time in two years that a church in Nigeria collapses during a service. So were dozens of people died in 2014 when a church collapsed in the city of Lagos.