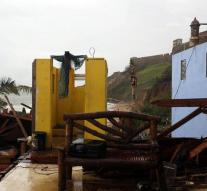 san juan - Due to the natural violence of Hurricane Maria, at least thirteen people died in Puerto Rico. That said the governor of the Caribbean island of Ricardo Rossello on Friday against CNN news channel CNN. Local newspaper El Nuevo Día spoke of fifteen dead.

'We have heard stories about complete destruction,' said Rossello. He warned that, although Mary has already housed in the northern Turks and Caicos Islands, the misery in Puerto Rico is not over yet. 'The danger of mudflows and high waves remains, as well as floods. '

The second hurricane this season from the heaviest category 5 dropped earlier this week, especially Dominica. There are certainly fourteen dead to regret. On Guadeloupe, two people came across the American Virgin Islands one.