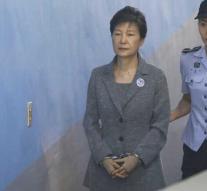 seoul - Former South Korean president Park Geun-hye has been sentenced to 25 years in prison on appeal. That reports news agency Yonhap. She was found guilty by the court of justice for abuse of power and bribery.

Park had previously been given 24 years in prison. The court ruled that she had conspired with her confidant Choi Soon-sil to get billions of wons from companies. The money ended up at foundations controlled by Choi.

The prosecutors had appealed against the court's decision. They initially had thirty years in prison and claimed a fine of 118.5 billion against the former president.