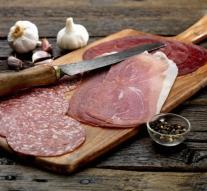 rome - Parents who have their children voorschotelen a vegan diet, the cell should be in. This is contained in a bill in Italy.

Such parents remember their children 'essential elements for a healthy and balanced growth,' says Elvira Savino politician of the center-right Forza Italia party. That should be penalized they find.

The bill follows several highly publicized cases of malnutrition in the country due to a vegan diet. He weighed a child by one in Milan as much as a baby of three months and stopped a 12-year-old from Bergamo to grow, according to his father because of the food he received from his mother.


In the latter case, the judge ruled that the mother eat must give the boy at least once a week meat.

'I have nothing against vegetarians or vegan as long as it is a free choice of adults,' Savino said on its proposal told Reuters. 'I just find it absurd that some parents their will to impose in an almost religious way, often without scientific evidence or medical advice. '

Vegans eat as vegetarians meat and fish, but also shun animal products such as milk and eggs. According to dieticians is a vegan diet for children, but there must be ensured that they receive all the essential nutrients in a different way.


The proposed law would apply to children under sixteen. Parents risking prison sentences to seven years. If the child is younger than three is that increased by a year.

'If there is a child ends up in the hospital by this behavior, I think we all have to protect,' said Savino. She believes that pediatricians vegan parents should be reported to the police as they do now if they see signs of child abuse.