Home / World / Cell punishment for hacker arrested in the Netherlands 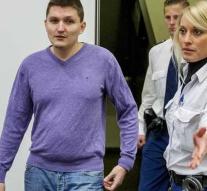 new york - The Russian Vladimir Drinkman, who was handed over to the United States by the Netherlands, was sentenced to 12 years in prison there. Prosecutors had accused him of being involved in a huge data theft.

According to the authorities, Drinkman and three others stole personal data from consumers on a large scale. They retrieved that information from the computer systems of companies. This included credit card numbers, user names and passwords. Co-defendant Dmitri Smiljanets would then have resold that data.

The hackers insisted, according to prosecutors, at companies such as supermarket chain Carrefour, retail chain 7-Eleven and airline JetBlue Airways. The damage to banks and credit card companies amounted to hundreds of millions of dollars.

The 37-year-old Drinkman and Smiljanets (34) were arrested in Amsterdam in 2012, where they celebrated their holidays. The judge in Camden, New Jersey, sentenced Smiljanets to 51 months in prison; equal to the duration of his pre-trial detention. Their lawyers have not yet responded.