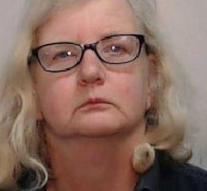 manchester - A British woman was sentenced to nine years in prison for killing her father, who then buried them in her garden. She killed her father after finding a box of child pornographic photographs.

The 63-year-old Barbara Coombes is known to blame for manslaughter, reports Sky News. She said she had killed her 87-year-old father after more than forty years of being a victim of physical and verbal abuse. She slapped him with a shovel and cut open his throat. Then she rolled up her father in a carpet and buried him in the garden. The next day she ordered a ton of garden soil.

The incident was in 2006. It was not until the beginning of this year that the case came to light when she confessed the matter to the police. The prosecutors believed that she suffered from post-traumatic stress disorder and was less accountable. Since 2006 she has received over 200,000 euros in pension money from her father.