Home / World / Cell for man who IS trying to highlight 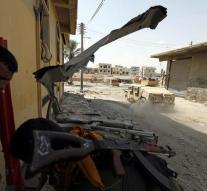 berlin - A Syrian refugee has been found guilty by a German court of an attempt to reveal Islamic State (IS) terrorist organization. The 39-year-old hairdresser, once fled to Germany from the Syrian capital of Damascus, was sentenced to a two-year sentence by a court in the city of Saarbrücken.

The man contacted IS and asked the organization to transfer 180,000 euros to him to buy weapons and explosives with which he would commit attacks in Europe. IS never transferred money to the man.

The prosecutor wanted a heavier punishment for the man because of the preparation of a terrorist attack. The judge thought that was not proven. Both parties appeal against the ruling.