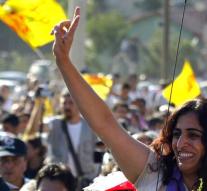 istanbul - Two Kurdish politicians have been in prison for fourteen and fifteen years in Turkey because they would belong to a terrorist organization and spread propaganda.

The former parliamentarian Gultan Kisanak, who was arrested in 2016, defended himself in court. 'Everything I do belongs to democratic politics. 'Kisanak was accused of having expressed support for the Kurdish party PKK, which is considered a terrorist group.

The other convicted, Sebahat Tuncel, also sat in parliament. She started a hunger strike three weeks ago and was not present at the verdict of the verdict.